"The Break" and Why Our Campers Love College League So Much 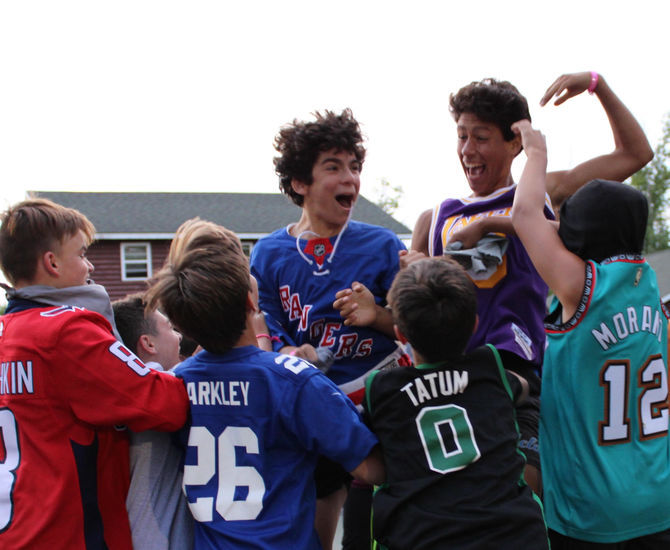 A little background on this event, which you will surely hear a lot about from your son, both during and after camp.

At Manitou, it is tradition each summer to hold a 5 and a half week-long competition that we refer to as “College League.” This unique intra-camp program begins by separating our entire camp community into four equal teams. The League begins with a “break,” where indescribable excitement envelops the main basketball court as the camp eagerly awaits to get called out to their team. Every camper is announced one at a time. As campers and staff get called out, they run/jump/dance into the middle of the court, encouraged by their new teammates with high fives, hugs, chest bumps, and shouts of joy.

Each team is then paired up with a dean – a veteran staff member that has demonstrated exemplary leadership skills and possesses a passion for all things Manitou. Becoming a dean is a true honor in this community and a role that others look up to and hope to become one day. You could ask any senior camper and they could tell you what team they will choose when they are a dean, what their team slogan will be, and what songs they will sing for final event of College League – “Pres Night.”

College League loops (a “loop” is a collection of games when all age groups participate) typically occur three to four times a week. Campers strive to do their best in activities that range from land and water sports to musical and dramatic arts. Through College League, our overarching goal is to integrate the values of Manitou through healthy competition and fun events. The themes of sportsmanship, spirit, integrity, tradition, brotherhood and the art of both losing and winning gracefully are discussed by each team, and as a camp collectively.

An important aspect of College League is that at any point during the summer, 75% of the camp is NOT in first place. The experience of College League is about the journey. The bonding that stems from being a part of these tight-knit teams brings new campers and veterans together in a way that lets each of them shine, and feel connected. In many cases, the campers who did not finish in first place at the end have the strongest feelings for their team.

Each team develops an identity of its own – many campers will forever remember their teammates, coaches, cheers, special moments, and songs from presentations. During College League’s final event, each team presents their own plaque (created by a Manitou staff member) that will be hung in the dining hall. The plaques make for some great dining room table discussion and serve as a reminder to those who were on those teams that they are part of camp history. Let the 2021 chapter begin…

Much more to come. Look forward to future announcements from each of the teams.