Each staff member goes through an intensive eight-day training program before the campers arrive. Areas covered include preparing for and reacting to emergencies, first-aid, and general camper health and well-being.

Parent: What is the ratio of campers to counselors?

Jon: The ratio of campers to counselors is 2.5:1. Cabins for boys ages 10 and under have at least 3 male counselors and 1 female counselor assigned to each cabin with 10 campers. 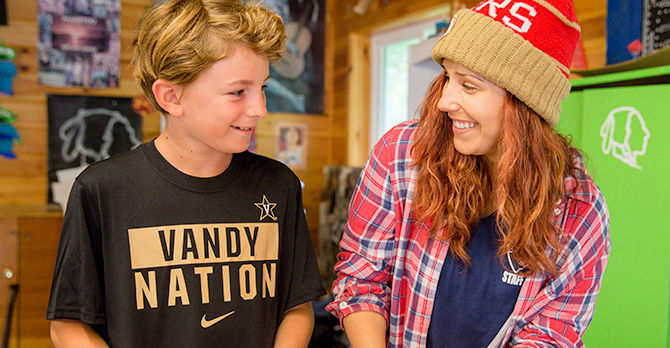 Jon: The female counselor serves as a motherly figure to support the cabin staff and help with the

adjustment of being away from home – especially for first-time campers. She spends time with the cabin during the day and at night before bedtime but does not live in the cabin.

Jon: Each cabin has single beds and bunk beds, bathroom and shower facilities, ample closet space for clothing and equipment, and a screened-in porch. We make sure there is at least one counselor

on duty in the cabin at all times so the campers are never left alone.

A Camp for Boys

Parent: As I investigate summer camps, one of the questions I have is whether it will benefit my son to go to a boys-only camp.

Jon: That’s an excellent question to consider. We believe there is a real benefit to campers.

We live in a co-ed world. At Manitou there are no romantic distractions and no pressure to impress the girls. We nurture boys as boys within an encouraging environment.

When a boy comes to Manitou he interacts with men who are strong and assertive, but they are also attentive, compassionate, and supportive. He experiences something unique: he can be himself, his whole self.

At the end of the summer he reenters the co-ed world with renewed confidence.